Today marks the 14th anniversary of 9/11/01 and the attack on the twin towers in NYC.

Yesterday there was a rainbow over the site of the twin towers.

Last night the U.S. Senate cleared an important hurdle which stood in the way of finalizing a sketchy nuclear treaty with Iran.

Today lightning hit the grand mosque of Mecca triggering a crane to collapse and kill nearly a hundred people.

Remember the “beer summit” at the White House? You know, that staged photo-op sham in which President Obama was going to singlehandedly resolve all racial tensions — I guess things only went downhill from there as he and his wife have continued to constantly pour kerosene on the flames of racial division while Jesse Jackson and Al Sharpton ran around with torches.

The cast of characters here sounds a lot like the opening to a bad joke. Will the Pope plead with the young man to repent? Or will the three men hug it out and usher in a new era of understanding and acceptance, while decrying the evil of “intolerance” and “bigotry” perpetrated by Bible-believing Christians who “cling to their guns and their religion”? Stay tuned for the punch line!

They say that actions speak louder than words, but in the case of our President, his words and actions have been in perfect harmony. Here he is calling himself a Muslim Socialist in 2013…

Anyone who has been paying attention knows that the only difference in President Obama between his days as a young Muslim Socialist and now is some gray hair. The only thing funny about this joke for the President and the fawning sycophants in the press corps was that the joke was on us as Americans.

So why was he so bold in confessing what his actions have always declared? Two reasons, I think: first, President Obama is no hypocrite. While he may use dishonesty to sell his agenda, obfuscate his misdeeds or criticize his political enemies, his words and his actions have generally lined up. Second, this was after his 2012 reelection. He won’t need to face the electorate again and answer for such statements.

I’ve got to hand it to the President. He has been relatively up front regarding his agenda throughout his tenure as a candidate and as president. It is easy to tell where his affections and sentiments lie both by what he says and what he does. He doesn’t pretend to like people who are his political foes. When injustice happens against them, he simply ignores it. Likewise, when people he is sympathetic toward perpetrate injustice, he is also silent. He has been wildly successful in achieving his objectives. Nothing has stood in his way, with the exception of a paper tiger GOP congress led by duplicitous traitors like Mitch McConnell, John McCain and John Boehner. He came in boldly stating his objectives and boldly achieved them. No one either chirped or moved a wing. This President will go down in history as a political genius, albeit a diabolical one.

South Carolina rainbow cloud in the form of a dove

We saw the return of the “Bethlehem” star in July. And what have we here? Could this be a harbinger of the last days outpouring of the Spirit?

Mark Kariuki represents a coalition of 38,000 Kenyan churches and 10,000,000 Kenyan Christians. Since the U.S. is seven times the size of Kenya, that would be the equivalent of a leader in the U.S. representing 70,000,000 Americans and 266,000 churches standing up and telling Obama we’re not accepting his gay agenda. Can you imagine if Christians in the U.S. had resolve and leadership like this? If that were the case I can assure you that there wouldn’t have been rainbow lights on the White House a few weeks ago.

“I tell you, my friends, do not fear those who can kill the body, and after that have nothing more that they can do.” – Luke 12:4

Every day the outrages come, and every day they are more incredible. In order to avoid transgressing the U.S. debt limit which was reached back in March, the federal government has simply ceased to update the numbers. The silence from the so-called Republican congressional majority opposition is deafening.

Isaiah 10:14 describes to a T what our President has done and how the so-called opposition in Congress has responded: “My hand has found like a nest the wealth of the peoples; and as one gathers eggs that have been forsaken, so I have gathered all the earth; and there was none that moved a wing or opened the mouth or chirped.”

The nation has been utterly plundered, and no one has lifted a wing or even chirped.

What is happening this very day was prophesied by Isaiah. Don’t think for a moment that the U.S. is not in Bible prophecy. I think it features robustly, though not by name. Revelation 17:11 is intriguing.

In much the same way that President Obama has proceeded with his fundamental transformation of America and, as Isaiah 10:14 says, “there was none that moved a wing, or opened the mouth, or chirped”, likewise Pope Francis has swept the world, uniting the vestiges of apostate, hierarchical Christianity, and seemingly overnight, overturning long held church positions on abortion, homosexuality, socialism and evolution. In effect, Pope Francis seems to be fundamentally transforming the Catholic Church. Mr. Obama and Pope Francis seem to be two peas in a pod doctrinally. Will there be a union of the Roman hierarchy with Islam in the near future as well? It will be interesting to see what results when these two prominent figures on the world stage meet together in September.

I was certainly not surprised by the results of this Gallup poll, but it was intriguing and compelling because there is comparative data for the exact same question going back all the way to 1937.

How enlightened we’ve become! Psalm 14:1 says unequivocally that atheists are fools. This is representative of how fast a society can plummet spiritually. This study demonstrates that substantial majority of Americans are either completely ignorant of what the Bible says about atheists or they disagree with it. In the space of one lifetime this change has occurred.

Perhaps Satan is winning the long war, or perhaps the 40% (58% – 18%) of people who changed their tune regarding the suitability of an atheist president derive their opinions on such matters based upon the herd rather than as a result of independent thought. Maybe back in 1937 there was a higher percentage of followers of Christ in America, or maybe there was a similar percentage, and the fact that Biblical understanding was greater at that time among all Americans moderated public opinion against atheism.

Which brings up an interesting question: can someone who follows the herd be a follower of Christ? Matthew 7:13-14 indicates otherwise…

It is also interesting that the same Gallup polling organization in December, 2014 found that 77% of Americans identified themselves as Christians and 76% believed that the Bible was the Word of God. So there is a maximum of 24% (100% – 76%) out of the 58% of people who would vote for an atheist that might do so because they themselves don’t subscribe to the divine authority of the scriptures. That means that AT LEAST 34% of Americans believe the Bible is God’s word but either haven’t bothered to read it or don’t allow it to inform their decisions/opinions!

The fool has said in his heart “There is no God”. How much bigger a fool is the one who acknowledges the divine authorship of the scriptures but doesn’t bother to see what they say or allow them to guide his opinions?

Here’s a story about a young lady in the Marine Corps: Lance Corporal Monifa Sterling court-martialed for displaying a Bible verse

Christians have long been among the most staunch of American patriots, supporting and populating the ranks of our courageous military.

But there’s a new commander in chief. And under his leadership, the U.S. military appears to be being systematically and vigorously purged of Christian influence.

I would not willingly send a son or daughter of mine into today’s U.S. military. Our military exists to defend our borders and the constitutional freedoms that we hold dear.

The marine was court-martialed for refusing to obey a direct order from a superior officer (who demanded that she take down the Bible verse). Our service men and women are only duty-bound to obey LAWFUL direct orders. This was an unlawful order, as it violates the supreme law of the land, the constitution, which the marine was sworn to defend.

I was struck the other day by a photo on the cover of the Wall Street Journal where an imposing looking Pope Francis shakes hands and gives a very Obamaesque “you better do what I say or else” death glare to an intimidated-looking Vladimir Putin. 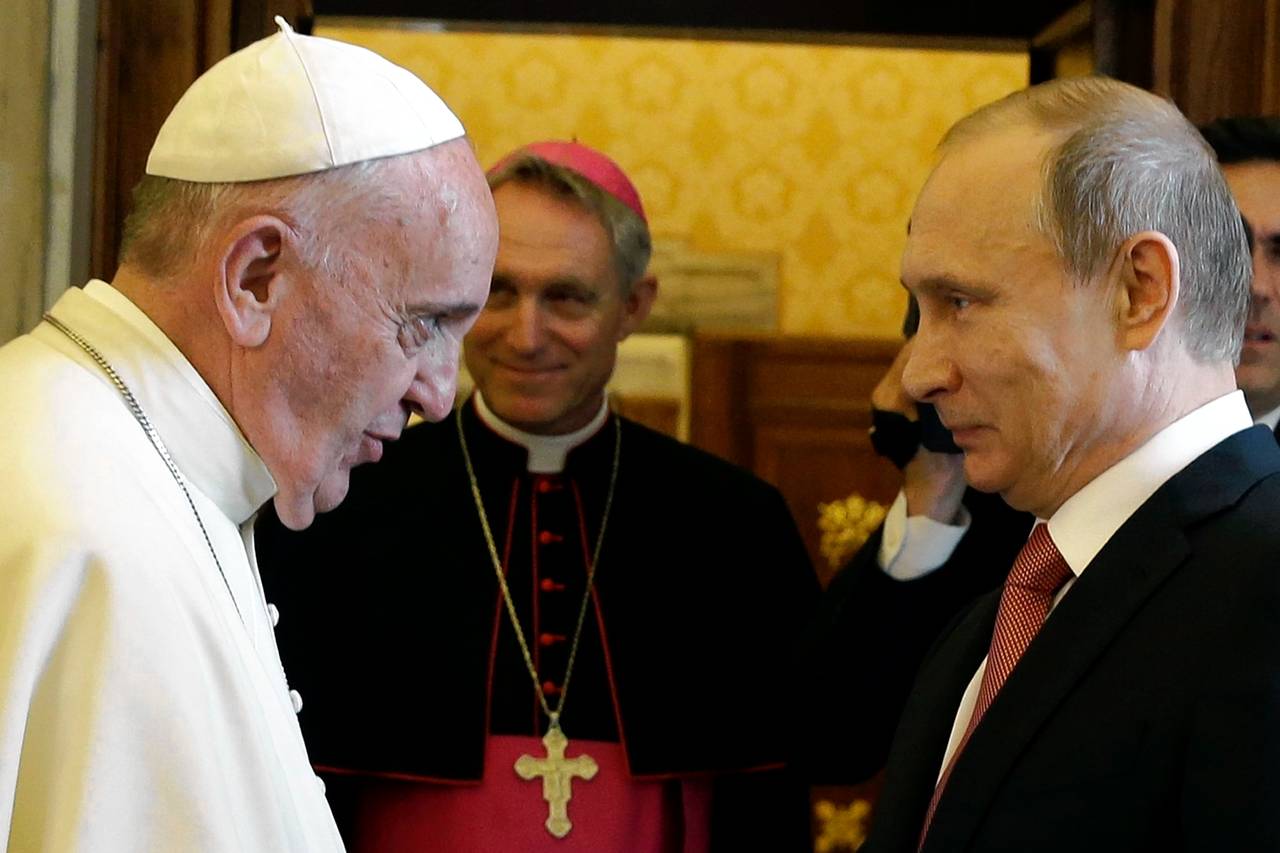 The pope has been a walking billboard for the Democrat party platform since he took office, and last week he took another page out of their playbook and leaked an advance copy of his climate change encyclical, all the while feigning outrage at such a “heinous act” as the leak. If you believe that, I’ve got some land in the everglades to sell you.

Global warming is a religion, so it might as well have the Pope as its new spokesman. Al Gore definitely earned his GW sainthood, and the baton has been passed to Francis. This pope is very popular (94% favorability in the U.S.). He will undoubtedly lose a little ground with this, but he’s got juice to spare. This Pope has made important step toward creating a fusion of progressive ideology and religion. He is also promoting a one-world state. The next step is a furtherance of his overtures toward Islam. Whether and how fast this happens will be an indicator of how close we are to the predictions of Revelation 13. Stay tuned!